I received this letter from a lady that contacted me last July 2012.  I love hearing about the memories folks have of their trips to  Young's Wilderness Camp.  From what I understand Barb came here back in the late 1950's and early 1960's.  Enjoy!


My niece told me she talked with you today, and I just had to say hello. I am her aunt (60 years old), and I came to Young’s camp from the time I was a very little girl (5 or so). We lived in Southern California, and every summer, we would drive (about a week) to your place, spend 2 weeks in the Black’s cabin and on the lake, and then drive back. I remember it so well, and have such wonderful memories, starting with the Youngs and the Schmidts. My dad had two girls, and he taught us how to fish as soon as we could. I loved casting a Daredevil or Johnson Spoon (if it was weedy), and my patient father would often take the line out of a tree, fix the bird’s nest in the reel, and allow me to troll with “big Toto”, a wooden lure about 6 inches long with a silver flapper on the end. My dad eventually caught a prize muskie with big Toto (much to my surprise because it was a HUGE lure). I will go through the old slides we have, as there are many pictures of the camp, us in the boat and cabin. These were some of the happiest times of my childhood. I want so much to come back, and plan to do so. My sister and I have severe spinal problems, so navigating the boat may be tricky, but I want to. My niece has the rods, tackle box, and muskie bat, so it would be fun for us all to come. We keep talking about it, so maybe it can happen. I have two girls in their 20’s who would love to see where I spent my childhood (and young adult) summers. My niece has 2 boys who would love it. She and my sister are in TX and I am in CT. My husband would also love to see it. As an aside, we tried fly fishing but didn’t like it. I loved the fiberglass rods, heavy line and reels, and casting the big heavy lures as far as I could, and placing it just so. Ah, the memories. Your website made me feel so nostalgic. And my sister used to swim with the pike and leeches.

Give me a little time to dig up the pics, and we’ll see what is there. Thank you for keeping up a wonderful place, and loving it like we do.

My Stay at Young's Wilderness Camp 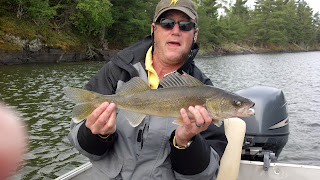 Carol & Perry,
Wow!!! What an unbelievable trip me and my long time fishing partner had at your place. As we mentioned, we bought the trip through a charity auction and really had no idea what we were in for. Both of us have fished Canada in the past but our expectations were certainly blown out of the water with you folks. Fishing is fishing, but the accommodations and level of service provided by you and your staff were superb. Our cabins were spotless every day, your meals were to die for (the prime rib was killer!), dock service by George and “diamond” Dave awesome and Perry’s fishing lies..................what more could a guy ask for? Again, just wanted to thank you and tell you and the rest of the gang how outstanding our trip was. We hope to make it back soon, possibly with the wives.
The offer always stands for a meal at my place if you are ever down Webb City, MO way. Keep up the good work and God bless you both!
Matt Sossamon
Posted by Carol or Perry at 6:17 PM No comments: 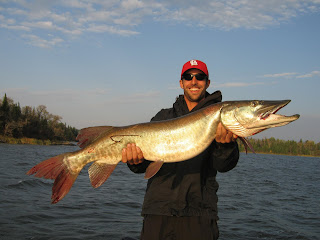 I hope this note finds you both well and rested after another a long season. We really enjoyed our stay with you once again and for me it was a bonus to be able to spend a week with my dad and my son fishing. It doesn't get any better than that! We really appreciate your warm hospitality and of course we all think the world of George.
Attached is the picture of Alex's muskie you requested. He lives in New Orleans. He caught it on October 7th at 5:15 p.m., on the last cast of the trip! It was 48 inches long, weight unknown, caught on a yellow and orange bucktail spinner.
Our whole family will be getting together for Christmas and I'm sure we will relive our adventure at Young's Wilderness Camp.The Entrup family wish you a Merry Christmas and all the best for the new year.
Kind regards,
Matt Entrup
Posted by Carol or Perry at 3:05 PM No comments:

Fly Fishing on Kiskhutena Lake and Lake of the Woods 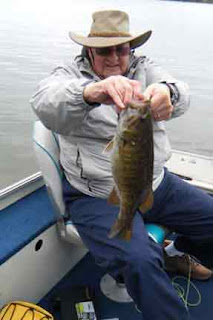 I got back home late yesterday from a great trip to lower Ontario. My fishing buddy Larry Fulkerson and I drove up (930 miles from here - we make it a day and a half drive) and spent the first three nights (2-1/2 fishing days) at Young's Wilderness Camp on Lake of the Woods. We heartily recommend this lodge. Every group has their own cabin but meals are taken in the main dining room. We both gained weight! The food was excellent. We had a nice 16' boat with a 40 h.p. Yamaha motor, front-mount trolling motor, and pedestal seats - perfect fishing machine.

The winds were a little bit on the stiff side so we fished the leeward sides of the islands and found plenty of cooperative smallmouths. Larry caught the biggest one - a really husky 18" fighter. He caught it on a Stonefly Bugger. I got semi-even that afternoon with a 15-1/2" largemouth on a brown/white Clouser. This was our third trip up there and it was the first largemouth we'd seen. I think it was the next day I caught a 31" Northern pike on a size 6 "Electric Chicken" - chartreuse over hot pink Clouser Minnow.

The third morning, we flew to Young's outpost cabin (about 15 minutes by float plane) located on Lake Kishkutena, a 7-1/2 mile long lake loaded with islands and rock outcroppings. A storm was coming in when we got 'dumped off'. The cabin was big and comfortable - 3 rooms and a bath. After getting everything into the cabin, we sat around till mid-afternoon waiting till we quit hearing thunder. We then went out and fished within a mile of the cabin and caught a lot of smallmouths. The next day, the weather was better but it was still windy, so we did our "lee of the islands" fishing again. Most of the smallmouth were in the 14-16" range. I had one hit that I thought was a smallmouth but then it headed deep and doubled my fly rod over. After several minutes, I got it up and realized I had a 36-40" musky. Just as I finally got its nose out of the water to grab it with my 'lipper", it spit out the 13" smallmouth that had hold of my Clouser and took off. That poor smallie had three long tooth marks down each side. I had heard of that happening but had never witnessed it before. The last fishing day, Larry 'tied' me with his own 36-40" musky caught on a "Schminnow" (Norm Zeigler's pattern). Even though we were using 30 lb. Mason hard mono for a leader, Larry's musky was able to get the leader in its mouth and bite it off just as we were ready to try to make a grab for it. Fighting those two big guys on fly rods was really exciting!

That last day at Kishkutena was gorgeous, warming to the mid-70's, and the smallmouths were really hitting about everything we threw at them. The most fun was in the mid-afternoon when I put on a popper. They really slammed that. In spite of a heavy epoxy coating, that poor foam popper was beaten to pieces by the time we went in to pack for the trip home!

All in all, it was a great trip and both Larry and I had a ball. I would like to give a plug to Perry & Carol Anniuk (the owners) of Young's for running a real class operation. It's just North of Nestor Falls, only an hour and a half out of International Falls, so if you're hunting someplace to fish in Canada without driving forever and a day, it's a great place to go. Guides are available. If you fish without a guide, Perry will provide you with a map with the locations of the 'hot spots' marked. Lake Kishkutena is a great lake to fish with a dense population of smallmouth bass, musky, lake trout and perch. 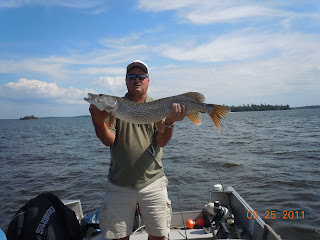 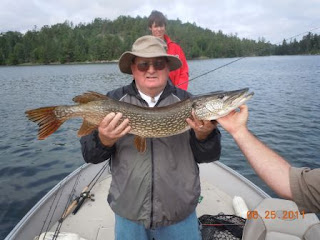 Sorry it’s taken this long for me to write - been very busy catching up at work. I have a large picture of me holding one of the many pike I caught as my screen saver. About 50 people per day see it and they all want to come get one. Words cannot describe the great time I had at your island. Everything from the trip to the resort to the trip as we left was outstanding. I waited fifty years for this one trip and it was well worth the wait. Perry, I am sorry we didn’t get to visit more. Carol, I can’t say enough for you. You made my trip. The cabins were great, the food was spectacular and you and your girls were wonderful. If possible I will be back. I have a lot of friends that want info on a trip. Please let me know when you will be in our area so I can pass it on. Again thank you for such a wonderful time. Tell George and the guides’ hello for me. They are the best.

Posted by Carol or Perry at 9:17 AM No comments:

Is this Ontario or Oklahoma? 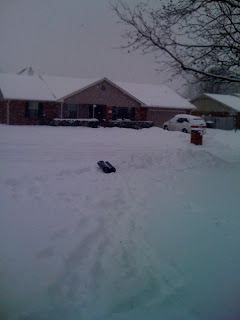 My friend Steve from Oklahoma emailed me this picture last week. The storm that went through in early February dropped about 20" snow - it looks more like Ontario than Oklahoma!
Posted by Carol or Perry at 9:36 PM 1 comment:

The Pursuit Channel which is carried by various cable networks as well as on their largest provider, DirecTV (satellite) where they are on channel 608. Charter is digital channel 87.

After airing on television, our episode will then be streamed on-demand from the show's website - http://www.realoutdoors.com.

I hope you enjoy the show.
Posted by Carol or Perry at 7:18 PM No comments: 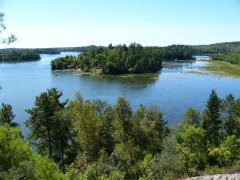